Johann Caspar Brunner (1813-1886), owner of a textile weaving mill (pictures below), builds not far from his factory, a residence with two apartments and a barn.

Brunner was a progressive man. It is thanks to his influence that the Aargau factory police law of 1862 introduced a ban on child labour under the age of 13 and a limitation of working time for young people to 12 hours per day. Brunner himself did not employ children or young people.

Director Brunner was a plant enthusiast. He built a large greenhouse to the east. Brunner died in 1886 and his heirs sold the house to the young town clerk F. W. Kull at the beginning of the 20th century. In the 1920s, Kull turned the barn section into apartments. The apartments will each receive 2 additional rooms, which will later become 1 bathroom.

In 1929, Gertrud (“Trudi”), the daughter of Kull, the community scribe, marries Arnold (“Noldi”) Rusterholz, a master builder from the Lake Zurich area. In 1943 – after the great crisis and in the middle of the war when there was no gasoline for cars nor trucks – they have to move their construction business and the family of six for economic reasons from Lake Zurich to Niederlenz.

One by one they build garages and depots for the busines operation, mostly in the winter, when there was little work. Building material was still lying around unprotected for a long time to come (see photo).

The big family needs more space. The attic is being extended for the then seven children. The entrance to the house was moved to the rear of the house. On the garden side, a 30 cm deep porch was built to accommodate the large cupboard. Two wooden buildings are being built; one for scaffolding material and the other for around 100 chickens.

The last stage will be a large hall for scaffolding material and a double garage, which will be accessible by lorry. During this entire construction period, the garden is also gradually improved, with dry-stone walls, stone slab paths and a “cottage” for warm evenings. But bad luck breaks in. “Trudi” falls seriously ill and dies at the beginning of 1952, the youngest child is just over 5 years old.

In 1951, in order to pay” Trudis” medical expenses,”Noldi” sells a piece of land to a grocer who deceives him: a competitor builds a single-family house while he has little work in the construction business. 15 years later, however, the children will buy back the land and the house.

1958 master builder “Noldi” Rusterholz also dies. The construction business is shut down because the children are partly too young or have other interests. For a few years, the business premises were empty until the other children of Noldi built four simple, cosy apartments in 1963 in the construction warehouse.

During this time, the attic of the large house was converted into an apartment. The greenhouse annex of 1900 is used as an architectural office from 1961 on. It is the birthplace of Metron.

With little money, one of the 7 children of the master builder rebuilds the old henhouse – which was previously inhabited for about 15 years by Luigi Fior, an Italian guest worker – into a four-room house.

In 1978, the old garage is extended. Two apartments and a sculpture studio are built. The apartments in the former construction warehouse each receive an attic room. The head-apartment of the former material magazine is extended and the former greenhouse -which has long been used as an apartment – is given a higher roof.
Connecting walkways are created so that one can stay dry from the newly constructed car shelter to the big house.

The single-family house, which was bought back in 1966, is extended and added to the north side. Three 2.5-room apartments and two 3.5-room apartments are built. The former garage becomes a communal space, one room is converted into a guest room with shower and toilet for the whole estate.
A bicycle shelter with room for garden equipment is created.

Rusterholz AG, which has since been founded, buys the neighbouring farmhouse from W. Schmids Erben.
The no longer habitable farmhouse is converted by simple means to a large flat. It gets two bathrooms and a new kitchen. In 2007, the attic and the dilapidated south façade were insolated and renovated.

On the remaining buildable plot of land, a multi-family house with six apartments is constructed.
The building is built according to the latest energy conservation standards (Minergy-P). The heat for heating and hot water is generated with 60 m2 of solar panels and a 36,000 liter water tank. These cover approximatively 2/3 of the annual heat requirement. 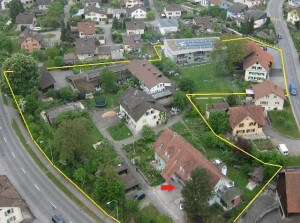